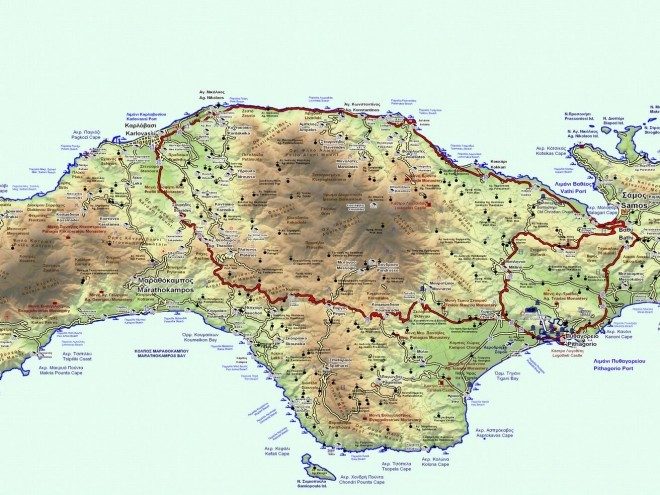 10 places not to miss in Samos Island

Ten places not to miss in Samos Island!

In the area of Heraion (phonetic > Ireon) are the ruins of the temple of Hera. This area has always been a place of worship, since mythology mentions that goddess Hera was born there.

The site of Heraion includes not only the magnificent temple of Hera but is a complete religious complex with a number of important buildings and structures such as the great altar with monumental proportions the north portico and the south arcade and also several temple-shaped buildings, built mainly in the 6th century BC.

In the yard and around the site of Heraion there have been found evidence of Mycenaean and Roman settlements.

Herodotus says that it is the largest temple in Greece. Indeed it must have been so since the height of the only column that remains today is the half of its primary. If we visually add this column next to another 154, it is understood the monumental size of the structure.

Heraion has been identified since 1992 by Unesco as a treasure of World Cultural Heritage.

Tsamadou (phonetic > Tsamadoo) beach is arguably one of the most popular beaches of the island. It is located on the north side of the island, on the main road that connects Samos town with Karlovasi, near the village of Kokkari.

It is a pebble beach with deep blue and crystal clear waters. The orientation is northern, which gives large and impressive waves when the wind blows from north direction.

The Tsamadou is fully organized with parasols and sun beds. You can also enjoy your coffee, drink or meal nearby the restaurants and beach bars.

Poseidonio (phonetic > Posidonio) is located east and south of Samos, across the Turkish coast and is easily accessible. The area of Poseidonio is the nearest point between the islands of Greece and Turkey, called “Mycali Strait” or “Eptastadios Porthmos”.

The village got its name from an ancient temple which was in the area and was dedicated to god Poseidon.

Poseidonio is a quiet, coastal village “closed” within a beautiful lush bay that protects it against many winds. The physical position is a sheltered fishing port and village famous for its fishermen and the fresh fish. The taverns and cafes along the beach will satisfy you totally.

Around the village there are many paths and trails for hiking.

Psili Ammos (fine sand) beach is one of the most famous and popular beaches of Samos. It is located in the south and east of the island opposite of the coast of Asia Minor.

The beach is wide and sandy. The waters are shallow and very clean suitable for swimming and playing in the water. There is a complete organisation like parasols, sun beds, showers, water sports etc. and several options for coffee and food along the beach.

Kokkari is on the north side of Samos and is one of the most developed tourist villages. Kokkari is considered one of the oldest settlements on the island as mentioned in Ottoman documents salvaged 1600 A.D.

On one side of the town you will find cobbled streets and many shops for coffee, cocktails and food and shops selling clothes, shoes, gifts and crafts, leading to a picturesque creek which also has a harbor for boats and yachts.

On the other side, and going to the beach road you will enjoy the great beach of Kokkari which is full of cafe bars, restaurants and hotels able to satisfy all tastes.

In the village you can visit the church of Agios Nikolaos, which is among the biggest and most imposing in the Aegean.

Visitors to Samos have the opportunity to visit the fascinating Natural History Museum. On display are many specimens of natural treasures from Samos and the Aegean. It was established by the “Konstantinos & Maria Zimali Foundation” and is divided into five sections: Paleontology, Mineralogy, Botanology and Zoology.

The fossilized fauna of Samos, which lived eight millions years ago, includes more than 60 animal species, most are mammals, but there are also birds and reptiles. The other sections of the museum includes items of minerals, herbs, sea life and animals from Samos and other places.

A very important collection of Historic and Ethnographic items is displayed also in the Museum (old costumes, documents and several period items).

Pythagoreio (phonetic > Pythagorio) is a seaside village located south and east of Samos and got its name from the great philosopher and mathematician Pythagoras, who was born in Samos.

The story of the village begins from antiquity, which can be recorded by the monuments inside and outside the village and in the wider region which of course are worth visiting. Pythagoreio is built on top of the ancient city of Samos with the marvelous port, which in the time of tyrant Polycrates was much larger and longer.  On the main street there is the Archaeological Museum with many remarkable discoveries which the collection is constantly enriched. You will also find a folklore museum with elaborate exhibits.

Pythagoreio is basically a tourist resort with increased traffic during the summer months, but has kept its picturesque, especially in the harbor area.
The full development of tourism in the region offers excellent facilities for accommodation, food and entertainment. Through the narrow streets and the surrounding hills you will find hotels, rooms and apartments that will accommodate you perfectly during your stay on the island.

Along the paved pier of the harbor and the narrow streets around, there are many restaurants, cafes, bars, clubs and a large market with many shops to suit every desire.

The Aqueduct of Eupalinos is one of the largest engineering projects constructed in ancient times. The purpose of its construction was the water supply of the ancient city of Samos (modern Pythagoreion). This is a 1036 meters long tunnel which was built in the 6th century BC by order of the tyrant Polycrates of Samos. The construction was entrusted to the mechanical Eupalinus from Megara and lasted about 10 years.

The accuracy with which eventually he constructed the aqueduct is amazing even by today’s technology. Experienced scientists dealing with construction projects of large tunnels around the world are also surprised in the design of this ancient aqueduct.

Characteristic of the construction is that the tunnel was opened simultaneously from both sides of the mountain. That’s the feature, Herodotus called it “amfistomo orygma”. The amazing thing is that the workers who undertook the excavation of the tunnel started from both sides of the mountain and met in the middle of the path with great accuracy, which makes this task wondrous feat of engineering and technology.

The aqueduct ran for over a thousand years until because of failure maintenance it became obsolete in the 7th century AD.

Currently, a small part of the tunnel can be visited and is located on the side of the mountain that overlooks the Pythagoreio.

The Kouros of Samos is an incredible archaeological find that revealed in excavations in the area of Heraio in 1980. It was one of the 5-6 kouros that adorned the north side of Iera Odos (Sacred Road) that linked Iraio with the ancient city of Samos.

Its construction dates from the archaic era, in the early 6th century BC. Its dimensions are colossal and reaches a height of 4.75 meters while with the base it reaches 5.50 meters which classifies it as the greatest kouros ever been found so far in Greece. 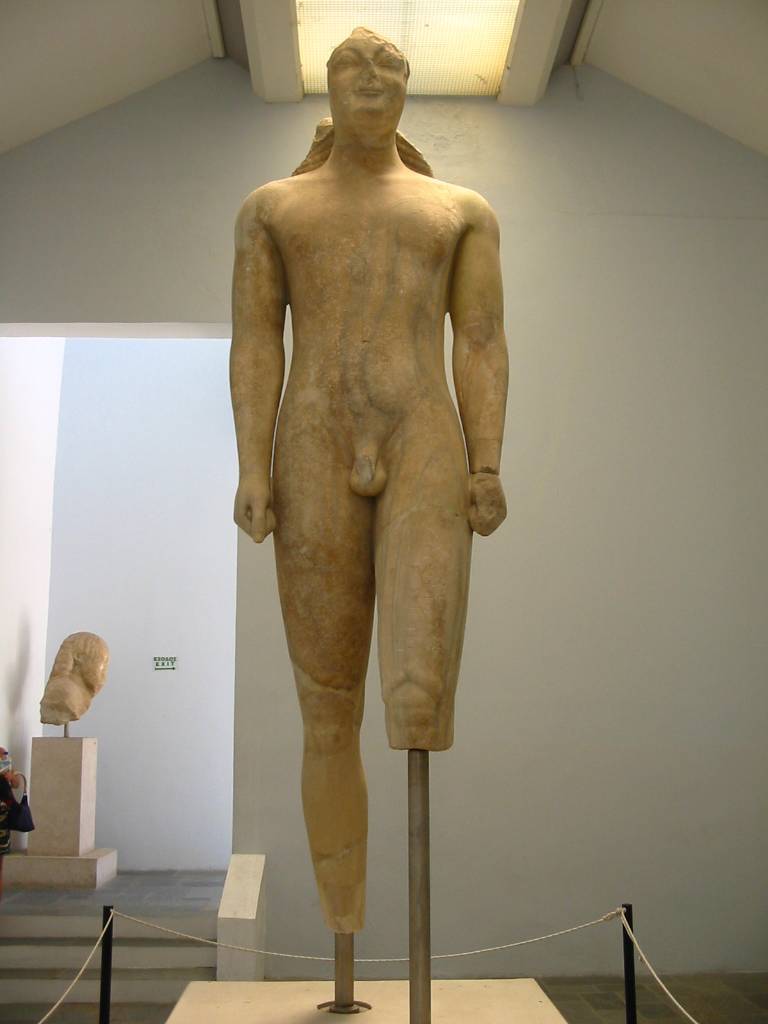 Because of the enormous size, a special room was built in the Museum of Samos and the statue was moved in the room before the surrounding walls were built because it wouldn’t not fit through.

It is a monument that one should not miss when visiting Samos.

One of the most beautiful and famous sights of Samos are the Potami Waterfalls, 3 km from Karlovasi. To get there you must leave your vehicle next to the Potami beach and walk along a path to the interior of the island.

The route follows the stream through trees and ferns. The trail ends at a small lake which means that you arrived. Indulge in the icy water and swim for about 50 meters until you face the first waterfall.

Alternatively to the left of the small lake you meet before the waterfalls, there are 50-60 wooden stairs that will take you high above the falls where the views are breathtaking. You will also meet a wooden tavern where you can to take a rest. Afterwards, following a steep path will lead you to the second waterfall where you can swim in deep waters.

It is an experience that should definitely experience even if Daisy Chain reach the first waterfall.

Previous Kokkari on Samos island, Greece is among Europe’s 13 best hidden gems for 2016
Next Pythagorion, a beautiful village in Samos – Video 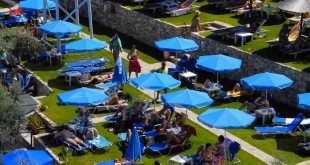 My admiration for Tsamadou beach started long ago, sometime in 1972, when, as young students, …