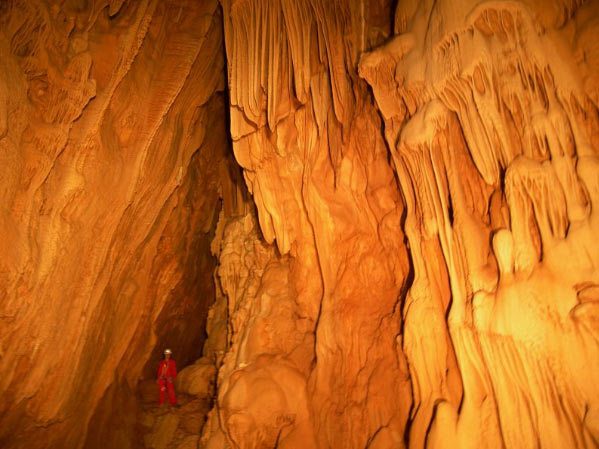 In the area Posidonion-Klima of Vathi Municipality, in a place called Xafakia,

an entrance of a precipice was located by Manolis Triantafillou, following a suggestion made by Stavros Meramveliotakis. M. Triantafillou went to the area and began exploring the precipice on April 1, 2007.

“At the entrance (Dimensions: 0,60 meters x 0,80 meters), we settled our gear and descended, almost vertically, for 8-9 meters.

We continued descending and saw that the precipice, in the form of a crevice, expanded continuously in an East-West direction, while after 5-6 meters we reached the roof of a big hall where we descended vertically for 23-25 meters, reaching the floor of the first level.

The dimensions of the first level are 30-35 meters length and 7-9 meters width, while the direction is from north to south. First level has beautiful and rich decoration at different points (15-20 meters high).

We continued eastwards and we saw the most impressive and rich decoration we’ve ever seen so far in our activities. The decoration covers, mainly, the south side of the cave as well as a large part of the roof.

After a 12-15 meters long descent we decided to continue the exploration in another mission. During our first visit we saw no obvious traces of previous human presence. Lastly, we found partial cave fauna namely bats, dolichopoda, spiders etc.”.

In this first exploration participated, in alphabetical order:

(The text and the photos are courtesy of the Speleological Association of Samos “Eupalinos”).

The Church of Panagia Saradaskaliotissa is dedicated to the Birthday of Blessed Virgin Mary. According …