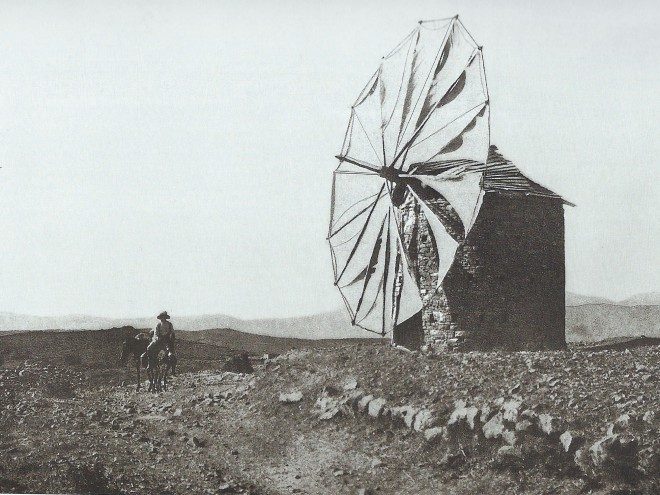 Windmills in the so-called “mule-path” (the road from Vathi to Mitilinioi in 1914).

The location of the mills (collectively known as “Milotopos” from the Greek words “Milos” = “Mill” and “Topos” = “Place”) was chosen on the basis of the strength of the winds, the easy access from the nearby villages, and many other factors. They were stone buildings and their roof was supported by a cylindrical wooden base with sails or blades mounted on the upper part of the stone wall, in order to be able to rotate according to the direction of the wind. The triangular sails, mounted on the blades, were wrapped or unfolded according to the intensity of the wind. As the blades turn, internally a series of gears and shafts moved the upper millstone and so grinding was achieved. The mills were working day and night and the old millers were paid in kind (the so-called “Axai”, usually 8-10% of the milling product). First photograph. 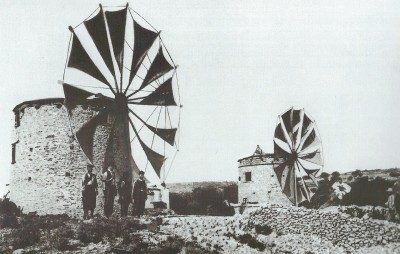 In the second photograph, you can see windmills with their blades in full development in the village of Militinioi (1914).

In the upper part of the stone wall one can see, as black notches, the phalanges (thick wild-woods placed radially on top of the wall, with their top edges protrude by some 2-3 cm. The wild-woods were specifically planned in order to slip easily in the mobile base of the roof). The orientation mechanism was the great advantage of the windmills. The windows, which were primarily uses for light and ventilation, also helped the miller to understand weather changes.

Previous Bireme: The ancient ship of Samos (or Samaina)
Next “Dodekaporto”: A Mysterious and Enigmatic Monument