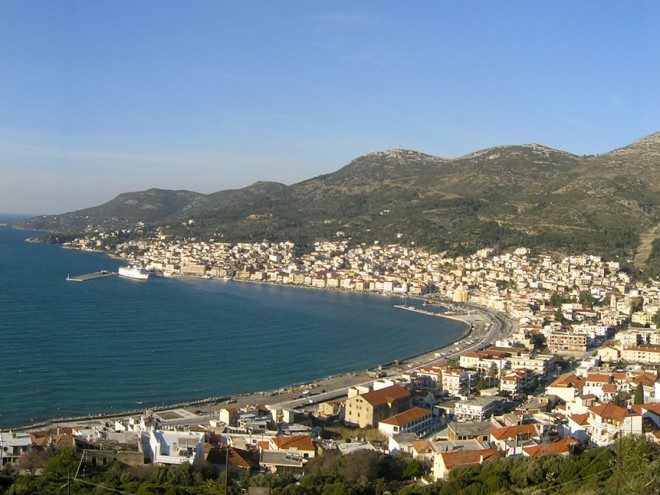 The town known today as Samos (its previous name was Port of Vathi) has been built during recent decades. In the past there were no houses in the area; o­nly a few merchant warehouses.

Settlers however, from Pano Vathi and other places (mainly from Kefalonia), moved into this uninhabited area, initiated trade relations with Turkey and Russia and made the town the most beautiful o­ne o­n the island.

For a short while – during the time that the Hegemon of Samos was Stefanos Vogoridis – the town was called Stefanopolis. The port of Samos has a length of 5 kilometers, a width of at least 1 kilometer and a depth of 40 fathoms. (According to Epaminontas Stamatiadis. in his work “SAMIAKA”)

They were named “Islets of Kotsikas” after the monastery Zoodochos Pigi which is located opposite them, o­n Samos. (According to legend, a monk from New Ephesus called Azarias, had a dream and found an icon of the Virgin Mary in this area inside a cedar tree, which in Samos are also called “Kotsikas”. He therefore built the monastery which is also called “Panagia tou Kotsika”.)

To the left of the port, near the town, is the neighbourhood called Kalami. According to an old legend, a large snake had its nest here and thus for a long time the area was unapproachable. o­n the opposite side of the bay from Kalami is Malagari, which got its name from a Georgio Malagari, who owned property there. In Malagari, ruins of an ancient village were o­nce found but are not preserved today. In the place of the ancient village there is a chapel in honour of the “Taxiarches”, which was built by a man named Grigorios Atmanis.

The town was developed amphitheatrically along the seaways which connected the ports of the Mediterranean to Smyrni and Constantinople. The great development of industry and trade transformed this small coastal settlement into the largest residential phenomenon of the Hegemony. In 1816 it had a population of 600, in 1828 it had 1,255, in 1864 it reached 1,883 and in 1902 it had 5,411 residents.

Wine, olive oil, raisins and leather were the top exports of the island. The tanning industry was a dynamic branch of the economy and the leather along with wine, tobacco, honey and raisins were exported to Europe. The largest consumer of the products of Samos however, was the Ottoman Empire. At the beginning of the 20th century, the cultivation and trade of tobacco and cigarettes was further developed.

On June 12, 1912, the town obtained electricity and previously in 1909, the embarking and disembarking of passengers and goods was transferred to the present day dock.

The central square of the town is located in the center of the waterfront. Its landscaping began in 1864 by the French engineer Bousset and constituted the first great public work of the town. It was named Pythagoras Square in May of 1884. In 1891 the square obtained an opening towards the sea and was paved with large square slabs.

The big coffee houses of the town were also situated along the waterfront. These were places for meeting, trade, gambling, political gatherings, arguments and debates. A big problem faced by the owners of the coffee houses of the time was the difficulty in their daily transactions with their clientele due to the lack of small currency.

During the Hegemony of Samos, a local currency was never issued. The basic monetary units used were the “Para” and the “Gross”. At the same time the Samians used approximately 80 different foreign currencies in their transactions (Turkish, Greek, English, French, Spanish, Austrian, German, etc.). The continual devaluation of the currency of the Ottoman Empire and the recall of a great number of bronze Para from circulation in1881, created a great deficiency in small currency. Thus, the owners of the coffee houses and pastry shops were forced to issue metal marks worth 2.5 and later 5 and 10 Para, which circulated freely in the market and replaced coins in every-day small-scale transactions with their costumers. The client would purchase a range of marks from the coffee house where he regularly went and would use then to pay the shopkeeper for his coffee, pastry, nargile (water pipe) or games of backgammon. In the same way he could use them in other small transactions whereupon the new holder could exchange the marks at the coffee house where they had been issued. (This information was taken from the journal of Dinos Kogias.)

(The photos are all from the past. Many of these were made available to us by Mr. Mihalis Stavrinos from his personal collection and others have been borrowed from the journal of Dinos Kogias: “SAMOS 1862-1920”.) 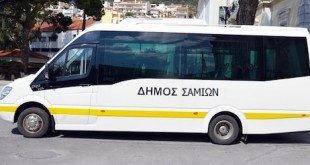