Samos Travelogue, Part ΙI: The South Route. A Useful Guide for All Visitors

News, Travelogue Comments Off on Samos Travelogue, Part ΙI: The South Route. A Useful Guide for All Visitors 651 Views

The Second Route to Karlovassi (via Pythagorion and Chora – Pyrgos)

The first route, the northern one, is available in this link.

There is one more route, the last one, of the Marathokampos area, which we will describe in the near future. 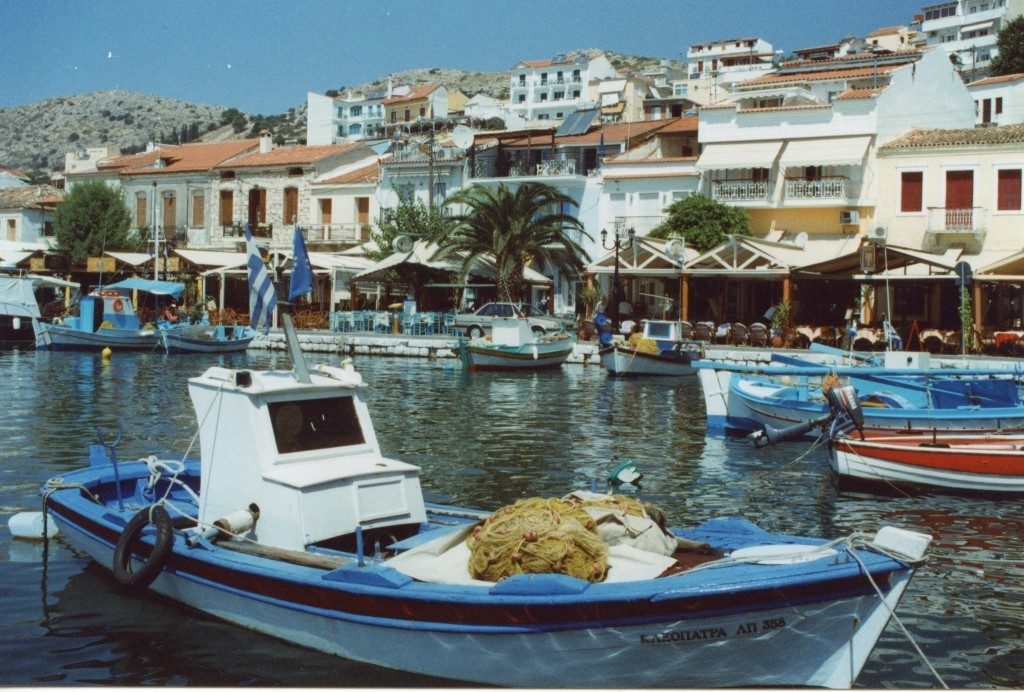 The famous Pythagorian is still wrapped in glory. It has always been that way! Built in a strategically important marine passage between three continents (Europe, Asia, and Africa) it was a safe harbor and a global destination at the same time…

Since the 6th century BC, in Pythagorion the history of Samos was actually written. It was the ancient city that flourished under the rule of the tyrant Polycrates, while its strong and well protected harbor hosted and protected the notorious fleet composed of “SAMAINA” type ships.

For Pythagorion you may read here…

The city suffered greatly by the arrival of the first European “tourists” or rather looters who “touched” the ancient marbles and pottery works, “walking” on the writings of the great Greek historian Herodotus. However, later on the archaeologists came and they managed to dig up … history. As a result, today all generations are look and admire astonished!

You can see and admire the remnants of a great ancient city, in which great minds of the past lived (like Epicurus, Aristarchus, and Pythagoras). The strong and long walls and the fortification still encircle the hill, although fragmentary, for some 6 km. You need to look for, imagine, and see the parts of the ancient harbor being camouflaged inside the modern one, the ancient theater, which “moans” beneath the wooden installations and comes alive by the many young musicians of the world, who meet at the “Samos Young Artists Festival”.

You have to visit the Archaeological Museum! You’ll be impressed by the exhibits and the artifacts, which make it one of the most important museums in Greece.

Don’t forget to visit the Folklore Museum located in the impressive “Doryssa” and the award-winning “Village” Hotels (both are located in the same area).

In the small hill, next to the parking place, an early Christian basilica was built, during the Byzantine years, in the place where today stands the Castle (Kastro). This castle was built during the 1821 Greek War of Independence and served as headquarters for the revolutionary leader Lykourgos Logothetis. Today is a museum. Next to the castle stands the great Church of the Transfiguration, which was built by Lykourgos Logothetis as a vow following the victorious naval Battle of Mycale (took place on August 6, 1824).The inscription testifies for it: “Jesus Christ saved Samos on August 6, 1824”.

Close to Pythagorion is the Tunnel of Eupalinos or Eupalinos Aqueduct, one of the most impressive achievements of the ancient world! It looks like “hiding” on the hill like back then, the ancient times when it was constructed for the Samian population (for water supply … or/and as an escape route during wartime!). The tunnel is actually a frozen corridor, 1+ kilometer long, the opening of which began from both sides simultaneously until the two tunnels met with little deviation. Unfortunately at this time the tunnel cannot be visited because restoration works are underway (engineers are planning to open the entire tunnel from Pythagorion to the Spring of Agiadon).

On the opposite hill you’ll see the Monastery of Panagia Spiliani of Kaliarmenissas, and must visit the very cold cave and its holy water. Cave’s low temperature makes the bodies steaming especially if the temperature outside is high. Worship the stone image placed in the small chapel deep in the cave where the atmosphere is devoutness! 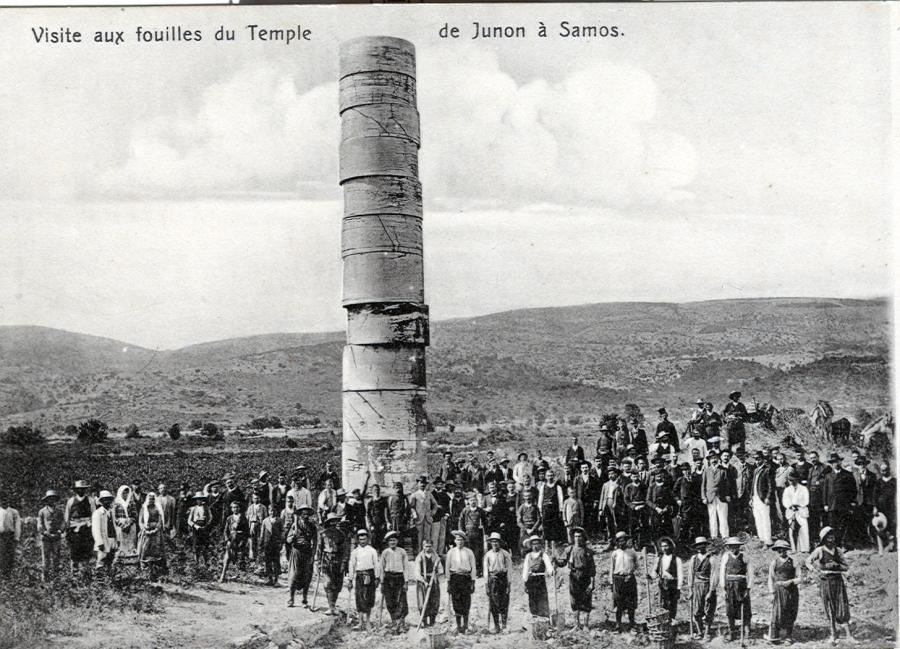 Five (5) kilometers away stands the Heraion, an ancient sanctuary at the mouth of the river Imvrasos, where, according to legend, the goddess Hera was born. According to Herodotus the place hosted the largest temple of the goddess Hera. Heraion is a one of UNESCO’s World Heritage Site and attracts thousands of visitors from all over the world every year. Several other churches, the altar, the Holy Street, the hot baths, buildings and arcades surround the … mesmerized visitors. A characteristic column, one of its kind and tall, although half of its original size, dominates the entire region place.

The port of Pythagorion is one of the most picturesque ports of Greece, with a characteristic circular shape, which resembles a … pan (in fact the old name of the city was “Tigani” or “Pan” in English). The port hosts luxurious yachts and taxi or ferry boats for daily trips in remote and isolated beaches and in the nearby beautiful island of Samiopoula.

During summer, life and especially nightlife in Pythagorion is bustling and endless. Taverns and souvenir shops, ouzo and coffee-shops, place their tables in the waterfront, improvise new tastes, offer live music, organize exhibitions, participate in local events and celebrations, and “drag” their guests to high standard of fun and entertainment. The Festival of Metamorphosis is held every year on August 6, and is the most famous festival of the island.

At the edge of the jetty, a bronze statue of Pythagoras depicts him standing indifferent to what is happening around him, engrossed in his famous theorem, bright under the sunrise and the sunset, and inside the eternity of geometry science.

The road to the beaches of Pythagorio and Potokaki is full of promises! Beach bars, volleyball courts, cocktails and parties: It is the most famous and noisiest beaches of Samos. Pythagorion Beach is spread in a huge mosaic arc and functions as the summer heart of the island. Here you may find the most beautiful and promising nightlife of the island! The many bars will not disappoint you…

Leaving Pythagorean behind please don’t forget to visit the Paleontological Museum of Samos, which hosts the famous “Wildcat under Glass”, so vividly described in the book written by the famous author Alki Zei.

The famous Tower of Sarakini, which is located near Heraion, is also worth your attention.

Keep driving and you’ll reach Chora village (the old capital city of the island). Don’t forget to visit the Monastery of the Holy Cross in the Mavratzeon area.

In Koumaradaioi you’ll find the well-known and beautiful local, hand-made, ceramics, like the “Cup of Pythagoras” and other (“Mascara bardaki”, “Sfyrichtraki” and more), all molded with various techniques (these ceramics are considered as a trademark of Samos). 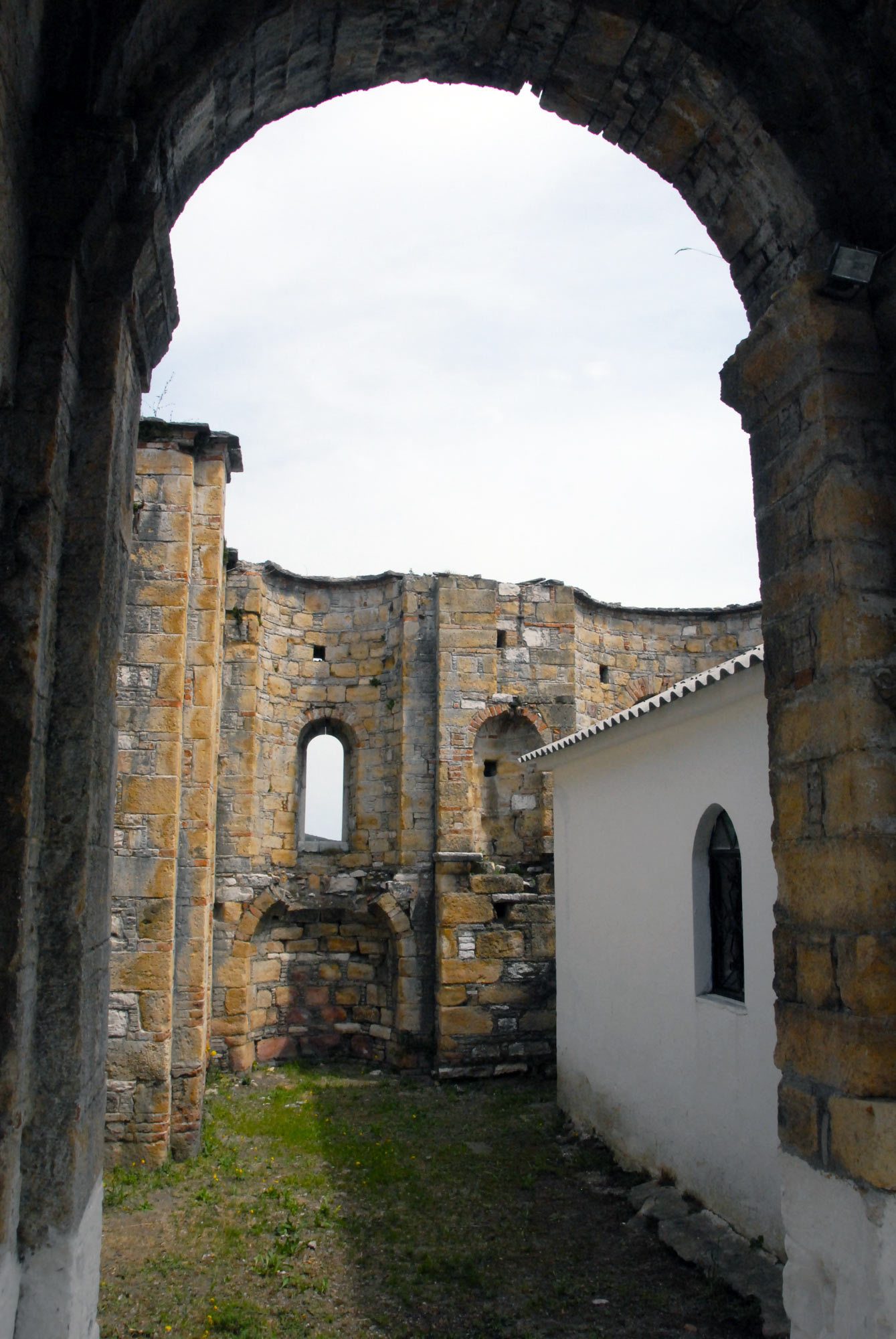 In Pyrgos you can walk in narrow streets, cross the square with the Blessed Virgin Mary, seek the gallery, and snag in another square, the one with the Church of St. George (the church collapsed due to an earthquake and now the old ruins host a modern chapel).

In Pyrgos area, you should stop at the Monastery of Megali Panagia and following the winding road through rich vegetation you’ll arrive at Saint Theodore junction, which leads to Marathokambos, Ormos, and Kampos Marathokambos villages (this small route will be a subject of future description). From Saint Theodoros, if you drive northwards you’ll reach Karlovassi.

During the evening hours the tanneries of Riva look even more mysterious, like toothless wrecks near the sea … standing in uncertainty!

In the early 20th century tannery industry was prosperous and, along with the tobacco factories, where the backbone of Samian economy. Some 40-50 tanneries were operating employing some 300-400 workers. In fact the tanneries of Samos produced some 25% of the overall production of Greece.

Along the road, from Neo Karlovassi towards Ormos, you’ll see neo-classical buildings and buildings from the era of Principality of Samos (1834-1912).

Here is the base of the School of Sciences. Students and teachers add some more positive energy in Karlovassia villages. Shops, buzzing squares, shopping streets … all produce unlimited vitality!

The finest Karlovassi is Paleo, with its old houses and the narrow uphill streets fool of frayed doors and windows. However, it is not so lively, of course, except at sunset when many people walk towards the Church of the Hagia Triada, the so-called Lycabettus of Samos.

You can find and buy ceramics and Samian wines, which you can also taste as clients in one of the many traditional taverns or in modern bars of the city.

Karlovassi is the commercial center of the island. It looks like it doesn’t real fancy tourism or the sea but this is not true! It seems that Karlovassi wants to turn its eyes towards the Kerkis Mountain! “Here is a mountain and all around is the sea”, Samians say. And when they say mountain, they mean Kerkis.

Kerkis is the second highest mountain in the Aegean Sea, next to Feggari Mountain of Samothrace, which is 1.611 meters tall. Kerkis’s peak, called Vigla, raises some 1.450 meters above sea level. It is strange, but west of the imaginary line from Karlovassi to Koumeika it seems that another island exist, an island inside an island!

(Details and photos taken by the Travel Book)

Previous Enjoying a wonderful afternoon in Kambos Marathokambou! (Pictures)
Next The Tortuga Beach Bar is impressive and glamorous and makes the difference in day and night fun!