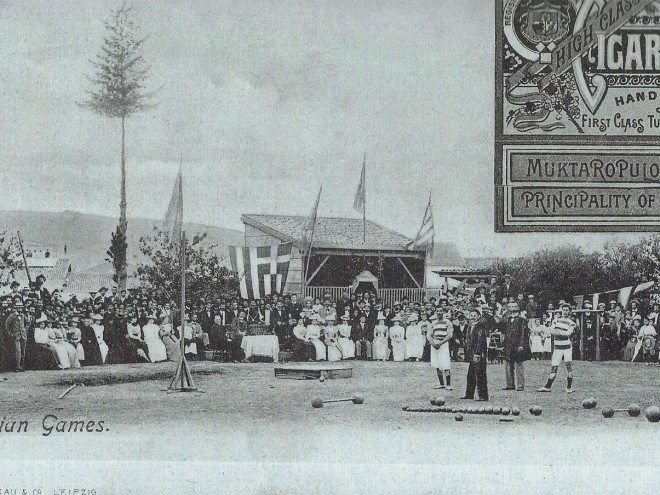 In 19-21 August 1903, in Vathi Port, the Gymnastic Popular Club of Samos organized the Athletic Events called “Samia” in order to celebrate the anniversary of the enthronement of Abdul Hamid II, Sultan of the Ottoman Empire.

The games were held in front of about 10.000 spectators in the newly constructed stadium in the capital city of Samos. In the games participated athletes from big clubs like Panionios and Apollon of Smyrna, Panellinios and Ethnikos GC from Athens, Panachaikos GC and others. In the photograph below you can see the athletes, the judges, the weights, the balls, the beams in the pit of the pole vault, and the seats of the officials.

On the first day of the games were held the 100, 400, and 800 meters races, weight lifting, the shot put, the parallel bars, the long jump and the pole vault, while in the next (second) day were held the 1.500 and 110 meters hurdles races, the horizontal bar, discus throw, stone throwing, wrestling, high jump, triple jump, and race walking. On the third day, I. Tsalparas from Tigani finished first in the 100 and 800 meters swimming (the only Samian athlete who finished in the first place). The games ended with the 10.000 meters race event (from Kokkari to Vathi), in which A. Koutoulakis won the first place (Ethnikos GC). He covered the distance in 36 minutes and 24 seconds. Following the end of the games and the awarding ceremonies, held by the governor A. Mavrgenis, crowds of spectators, along with the Philharmonic Orchestra and with constant cheers and accolades accompanied the winners in their parade in the streets of Samos.