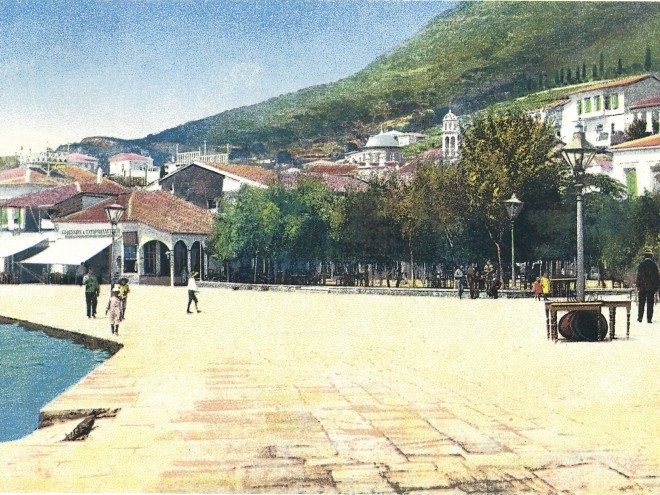 We are at the beginning of 1900! The square has already been named Pythagoras Square and has taken its shape and form. From the pictures you can imagine haw it was back then…

In the upper photo Pythagoras Square and the city garden are shown (Vathi Port, 1904-1908).

Pythagoras is the main square of the city and is located in the middle of the waterfront. Its modification began in 1864, following the design and supervision of the French engineer Bousset [1] and it was the first major public work done in the capital city of Samos. It was named “Pythagoras Square” in May 1884. In 1891, due to the demolition of some coastal houses, the square became open to the sea, thus taking its final form.

In 1891 the square was covered (paved) with large plates shown in the photo. [2] It is surrounded by coffee and pastry shops, restaurants (like the “Lykourgos Logothetis” of M. Mafroeidi and M. Kalomoiri), hotels (such as the “Great Greece” of N. Varvouni), and commercial shops (tobacco, barber shops etc.).

Pythagoras Square is the busiest place of the city and the heart of almost every political and social manifestation. It is the first impression of all visitors who disembark from the steamers of “Eastern Steamers P. Pantaleon”, the “Archipelago Steamers” of Chatzidaout Farkouch, the “Samian Steamers”, and the “Panhellenic steamers” of the Austrian Lloyd etc. The photo was taken during a spring afternoon. Coffee-shops have lined up their tables in the shade of garden trees waiting for clients. In the background is shown the dome and the bell tower of the Cathedral of St. Nicholas.

In the second picture you can see the central coffee-shops of Pythagoras Square (Vathi Port, 1902-1904). 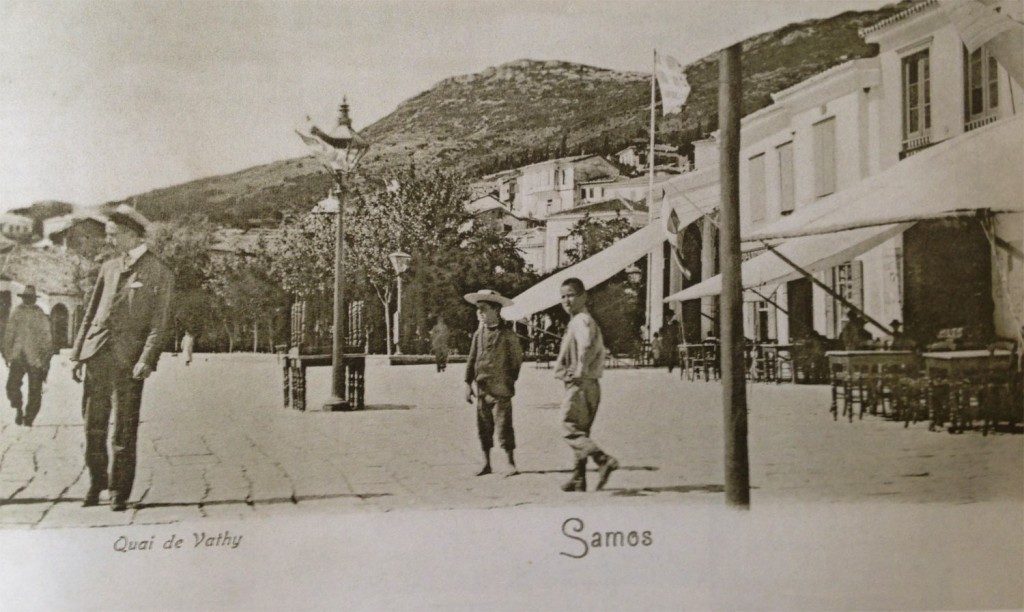 On either side of the square, parallel to the waterfront, the great coffee-shops of the city were located: Places of meeting between the port people, the market people, the workers, the merchants, the tradesmen, and the travelers. Also places of trading venues, lottery and other games, of political speeches, feasts, fights and heated debates. In other words, places where people form a common sense of social behavior and life through an endless bargain of ideas, actions, practices, and customary rules.

In the picture, the heavy wooden tables and chairs have been placed in cobbles. Clientele is still low. Typical is the use of tents for sun protection, a tactic that had become popular in recent years. The last coffee-shop, in the direction towards the square, is “Omonia” of Pericles Zographos. Other big coffee-houses in the early 20th century was that of Manolis Skarpelis, of Maniatis, of M. Skapetis, of Diamantoula Sardi (in 1899 it was bought by Kleanthis Karachristodoulou and Nikitas Melachrinos), coffee-shop “Athens” of Nikos, the coffee-shop of Kalomoiris who, during the summer months, use to play Karagiozis theatre, the “Sea Breeze” of Tsoukaladakis brothers etc.

A major problem for the coffee-shops back then was the difficulty in dealing with clients on a daily bases due to the lack of metal coins. During the period of the Principality of Samos (1834-1912) local currency was not issued. The basic units of currency were the lucre and the piaster. Simultaneously Samians used in their transactions some 80 different currencies of foreign countries (Turkish, Greek, English, French, Spanish, Austrian, German, etc.).

The continued devaluation of the Ottoman currency and the withdrawal of a large number of copper coins in 1881, creating an acute shortage of small-value coins in the stores of Pythagoras Square, forcing them to produce metal chips worth 2,5 and later 5 and 10 units. These units circulated freely in the market and replaced other coins in everyday transactions. Thus, the customer bought a series of chips, produced by his favorite coffee-house, and each time used it to pay for coffee, pastry, water pipe or backgammon. Similarly, the holder of the chips could use it for other small scale transactions and the new owner could redeem the chips in the producing coffee-shop.

In the next picture you can see Coffee-shop brands of Pythagoras Square that belongs to Pericles Zographos (PZ), Manolis Skapetis (MS) and the pastry-shop of Aristotle Sofoulis (AS).

In the last picture (below) you can see packs of handmade cigarettes of Karathanasis and Stephanou, sold in famous tobacco-stores of Pythagoras Square in the early 20th century. 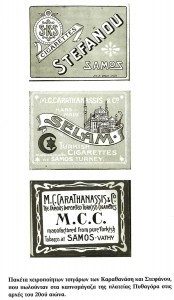 Previous In 1895 Vathi had its own Eiffel Tower!
Next Excavation Work in the Foundations of the Ancient Temple of Hera (Picture of 1902) 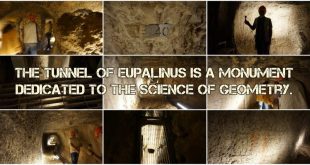