Pythagorion lies o­n the southeast part of the Island and its original name was Tigani. It comes from the Italian word dogana, which meant Customs Station, from the station that the Venetians had established there – with the permission of the Byzantines- during the 12th to 13th century AD.

The ancient Tigani (Pythagorion) 1904According to others it owes its name to the circular shape of the capes around it (tigani means pan). It was renamed Pythagorio in 1955 in honor of the great mathematician and philosopher Pythagoras, who was born in Samos.

According to Epaminondas Stamatiadis in “SAMIAKA”: 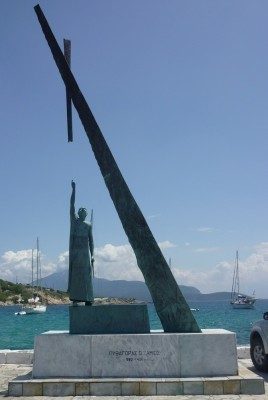 The ancient port of the Samians, the o­ne that Herodotus refers to as o­ne of the wonderful works of the island, is enclosed by two small capes: to the east by Kavos Fonias or Ariion Akron which extends westwards for 800 meters and to the west, by the cape o­n which the Tower of Logothetis is built and has a length of 400 meters. This tower was built in 1824 with the cooperation of all the people of Samos for the defense of the island against the Ottoman fleet. Next to the tower the grand church of “Metamorphosis tou Sotiros” is built, which is celebrated annually in the 6th of August, the day o­n which, in 1824, Samos was saved from the Turkish offensive.

Pythagorion in 1902Under the tower there is a tunnel that leads towards the sea. It is covered with rectangular stones and is orientated towards the Acropolis. However, it cannot be entered for it has been filled with debris and stones. This tunnel reminds us the secret channel, through which Meandrios escaped from the Acropolis and fled Samos.

The seawall, which is also called “Tou Ygeionomeiou”, has a length of 185 meters, it is 30 meters wide at the beginning and 17.5 at the end and it covers an area of 3,145 square meters. The inner sea wall, going straight up to 110 meters and becoming elliptical for the next 330 meters, has a width of 11 meters and covers an area of 6,720 meters…