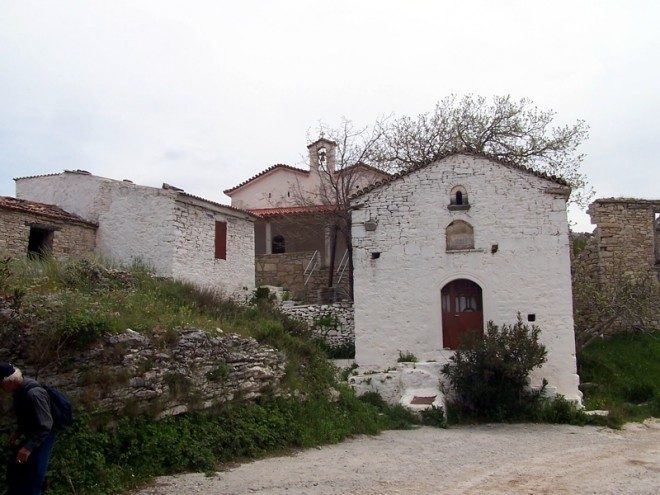 In Mytilinioi, one of the largest villages of Samos, in Koutsodontis area, are located 45 caves around the hill, all of them entrances to an Ancient Mine.

The first entrances are located at an altitude of 147 meters, hence the visitor can enjoy the wonderful view of the valley surrounding Hora.

All the entrances are supported by hand-made carved columns. The columns account for the accuracy of the study made before construction, the well-planned layout, and the careful construction of each and every entrance, in order to keep the mountain and the soil above stable and in place.

Time, winds, and rain, have passed, wiped, and fell upon these ancient structures for thousands of years. As a result the harshness of the columns was eventually softened, the ancient traces faded away, and the sweat of the workers (or rather slaves) has been washed away from the chiseled aspects of the columns. So, today they stand as artworks and constructions worthy of admiration.

In one of the 45 entrances, the hole leads to the inside of the hill, where explorers have recorded 8 levels and measured its maximum depth at 70 meters. All levels share similar support structures, while each of them is 1 km long.

Most likely, the history of this place hides many more surprises for us to discover, but already we have serious archaeological reports and clues regarding its use in the past.

According to Herman Kienast, Architect of the German Archaeological Institute, former supervisor of the archaeological excavations in the Temple of Hera, and studier of the Tunnel of Eupalinos (or Eupalion Aqueduct), this was the actual place where building materials were mined for the construction of the great Temple of Hera, other buildings in the sanctum area, as well as in the ancient city of Samos (nowadays Pythagorion).

Undisputed evidences of this intense mining activity are the existing, and well-preserved, engraved pieces of rock clearly visible in the floor of the mine.

“Samian” newspaper (edited by Epaminondas Stamatiadis) reported that, during the 1821 Greek War of Independence, the place functioned as a “Nitro Mine”, a place where monk Ignatius manufactured gunpowder using nitrates. Unfortunately, in modern times, the mine has not received proper attention, in accordance with its importance and historical value.

However, it is very important and promising that since 2002 the Greek Ministry of Culture, following the advice of the Greek Central Archaeological Council, is conducting topographic surveys, measurements, and surface research of the area surrounding the ​​quarries, under the supervision of the archaeologist of the 21st Ephorate of Prehistoric and Classic Antiquities, Maria Viglaki-Sofianou, and the contribution of the architect (employee of the same Ephorate), Ioannis Mitsoulis, while on behalf of the German Archaeological Institute participates the architect Herman Kienast.

During recent years, fires have destroyed the surrounding forest, which was a “protective shield”, so to speak, in terms of static, for the stability and preservation of the whole site. As a result, erosions have affected the soil seriously, hence immediate action is needed and required in order to stabilize the soil or else the whole site might collapse.

During the past some attempts were made by the Prefecture and the Municipality of Pythagorion, in order to clean up the area. The effort was strongly supported by the newly created Speleological Association of Samos “Eupalinos”.

This archaeological site, which can be characterized as unique, on a global scale, in terms of its extension inside the mountain and its architecture, “request” our interest for its rescue and promotion.

Following a study of space configuration, made by the Greek Ministry of Culture, all 45 entrances of the quarries can be visited by tourists, integrated in an impressive route starting from the top of the hill, passing in front of the entrances all the way to the north entrance of the Tunnel of Eupalinos and the Springs of Agiadon, the water of which was channeled through the tunnel.

Through coordinated actions by the local authorities, special studies and integration into respective European programs, the inside of all 45 caves could be made visited, thereby highlighting another one admirable ancient work of Samos.

(The text and the photos are courtesy of the Speleological Association of Samos “Eupalinos”).