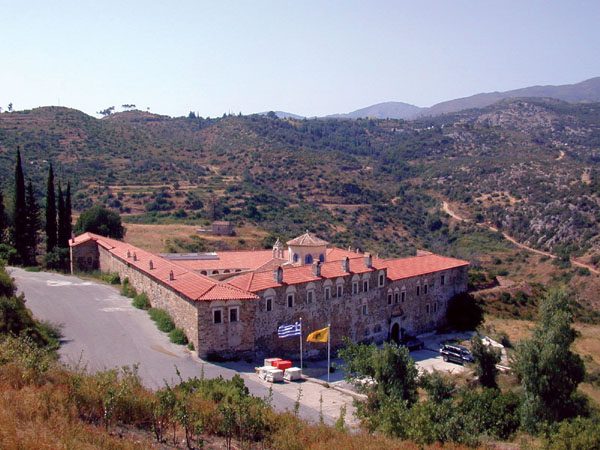 The Holy Monastery of Megali Panagia

Galleries, Monasteries, News Comments Off on The Holy Monastery of Megali Panagia 580 Views

The Monastery of Megali Panagia (or of the “five ospition”) is located in the middle of the southern part of Samos and it was founded in 1586 by the monks Nile and Dionysius (both had become monks on Mount Latros, near the ancient city of Miletus in Asia Minor).

The Cathedral of the Monastery is diagonally positioned in the middle of the courtyard. It is dedicated to the Assumption of the Blessed Virgin Mary, and it was built in 1593. It follows the Byzantine order and represent an accurate imitation of a cruciform, complex, four-column, Athonite Church with narthex, exonarthex, and a chapel dedicated to the Holy Apostles. Externally is surrounded by the usual, and traditional, quadrangle rectangular, two and three-storey building complex, by means of which the devout Catholic appears distinguished and imposing, inside the once green landscape, since the monastery experienced many great catastrophes by successive fires, which threatened the Catholic itself.

Inside the Catholic, the old marble tiled floor, with a composite umbilical center, is well preserved. The floor is covered with beautiful relief depictions of Adam and Eve, in full body, while at the center of the depiction stands the tree of knowledge of good and evil and the serpent, symbol of evil and fraud. The relief is surrounded by beautifully marbled early Christian parapets. Before the Sanctuary stands the carved and gilded iconostasis (made in 1740), on which the despotic (local) icon (made in the 18th century) is incorporated. The episcopal throne (facing east), which is of the same style and technique, was made in 1803, while it was gilded few years later, in 1819.

The pulpit, made in 1805, and the lecterns are exquisite examples of the decorative woodwork of the 18th century.

A remarkable piece of art is the carved double-door of the main entrance (made during the 17th century). The door is decorated with floral motifs and scriptural animals and birds, as well as other symbols inlays. The entire Church is covered with frescoes made by an unknown artist, who must have learned the art of hagiography in the Holy Mountain (Mount Athos). According to the inscription, preserved in the left part of the western wall, the painted decoration was completed in the year 1596.

The frescoes of the Catholic, despite the damage suffered from various causes, are rich in terms of iconography, and tell the story of the Akathist Hymn, depict scenes from the Gospel, the Second Coming (especially in the narthex) etc. In the, embedded to the Catholic, founding chapel, the frescoes tell the stories of the Saints. Above the northern end of the narthex rises an austere square marble spire, consisting of four polyspondylous cylindrical stanchions, ending up in a perforated decorative dome. The pillar of the monastery, according to the inscription above the main gate, was built in 1762.

The Monastery contributed greatly to the preservation of the morale and the traditions of the Greek Orthodox Samians, during the long-lasting Ottoman occupation, it cultivation Greek literature, while during the 1821 Greek War of Independence, it was a base for local fighters.

Since 1901, the Monastery, which was a major center of liturgical life and psalmody, celebrates on August 23 (The Assumption of the Blessed Virgin Mary), and is a pilgrimage of all Samians and many-many other
Greek and foreigners.
Phone Number: 2273041249