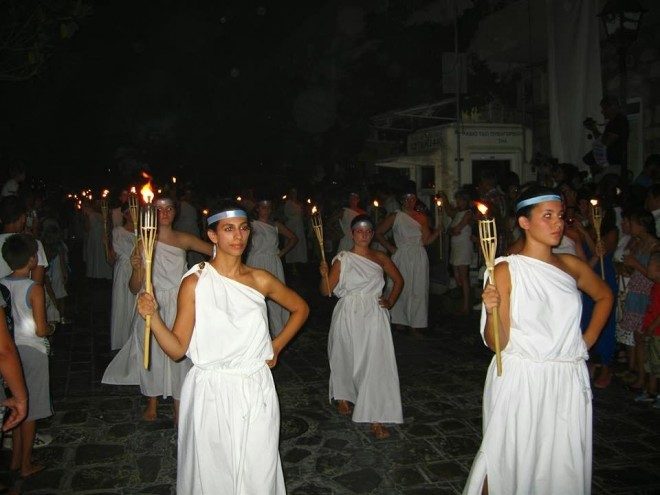 From 24 July until 19 September 2015 the “Heraia-Pythagorean” Festival will be held in the city of Pythagorion. The festival sought to represent the ancient feastival of Heraion.

Tina Alexopoulou will perform well-known songs, previously performed by Melina Mercouri herself in concerts all around the world.

Monday, 17 August 2015, Ancient Theatre of Pythagorion: “Say it with a Myth: Songs Inspired by Ancient Myths”.

Vocals: Dimitra Tsianikas, Piano: Panagiotis Gogos. The “Lycurgus” Children’s Choir of the Cultural Association of Pythagorion Samos, under the direction of George Koumaradiou, will also participate in the concert.

Wednesday, 19 August 2015, Banks of Imvrasos River, Heraion Samos: “The Feast of Heraia: The Heraia in Heraion”

Representation of the ancient festival of Heraia, taking place in the banks of Imvrasos River (theater, dancing, and music events are scheduled).

Thursday, 20 August 2015, From the entrance of the Ancient Temple of Hera to the Port of Pythagorion: “The Feast of Heraia: Women’s Race and a Big Procession of Heraia”.

Women’s Race: In the entrance of the Ancient Temple of Hera, Starting Time: 19:30

Saturday, 19 September 2015: “From Vourla to Vourliotes with George Seferis’s Poetry as a Boat”

During this tribute, to the Greek Poet and Nobel Prize Winner for Literature (1963) George Seferis, the impact of the Ionian Thought to Seferis’s poetry will be discussed, while Zafeiroula Hadjifotiou will read a set of selected poems.

The festival is under the auspices of UNESCO’s National Commission and the Association of the Greek Olympic Game Winners.

Watch the video of the 2014 festival, courtesy of Thomas Kardakaris