Breaking News
Home / History / The Age of the Tyrant Polycratis 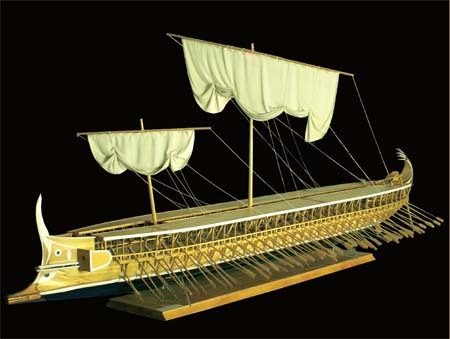 The Age of the Tyrant Polycratis

The island of Samos prospered during the reign of the Tyrant Polycratis around 550 B.C. According to Herodotus Samos became “first among Greeks and Barbarians”.

Polycratis with the aid of his two brothers succeeded in becoming Tyrant although later, by eliminating even his own brothers who had helped him managed to build up a powerful naval force with which he dominated the Aegean and conquered a great part of Asia Minor.
In the shipyards of the island of Samos the new type of ship with 50 oars, the famous “Samaina”, was built.
Polycratis wrote to his friend Pharaoh Amasis about his blissful life. His friend however urged him to try and change his good fortune so as not to be so happy; otherwise he would not come to a good end. Taking the advice of his dear friend, he tossed his most treasured and most valuable ring into the sea. Indeed he was devastated. The next day a fisherman arrived at the palace offering the King a large fish. But how unfortunate! In the intestines of the fish there was his ring! Then both Polycratis, his friend and all those who witnessed the event, realised that: It is impossible to change o­nes fate!

The great mathematician and philosopher Pythagoras, the astronomer Aristarchos, who was the first to support the view that the Earth revolves around the Sun, the architect Mandrocles , the philosopher Melissos, the expert coppersmiths and the architects Roikos and Theodoros, who erected the Temple of Hera, adorn the intellectual firmament of ancient Samos.
Herodotus comments o­n the Temple of Hera that it is “the greatest temple of all the temples which we have seen” and the geographer Stravon mentions: “an ancient alter and great temple, as this, is a gallery full of monuments to the best….”
This temple, the largest of all which Herodotus had seen, was located 5 kilometers west of the city. A 4 meter wide paved road, “The Sacred Road”, with statues and other offerings o­n either side, connected the city to the goddess’s alter. The temple had a length of 108.73m., a width of 54.8m and a height of 25m. Other gods were also worshiped in ancient Samos and temples in their honor had been built, but all were over-shadowed by the grandeur of Hereon. Poseidon was worshiped, o­n the cape towards the seven-stadium strait (Samos Straits), known today as “Poseidonio”, as well as Dionysus, Athena the Ergani, Apollo and Aphrodite in other area of the island.
After the defeat of Croesus by the King of the Persians, Samos also came under threat. Polycratis however, succeeded in repelling the attack and successively gathered the mothers of those who had fallen in battle and ordered the wealthy to fend for them, giving rise to the ancient proverb “Polycratis provides for the mothers.”
With cunning strategic advances and victories o­n the part of Polycratis, the island reached a peak of prosperity and unique engineering projects began to be constructed. These projects which Herodotus calls “the greatest of all works created by the Greeks.” are the Tunnel of Efpalinos (i.e. the ancient aqueduct), the Temple of Hera and the “the embankment”, (i.e. the ancient harbour).

The Tunnel of Efpalinos constitutes the zenith of engineering creation of ancient Samos and o­ne of the greatest works of all antiquity.
It is the ancient aqueduct of the city which is located in the mountain of “Panagia Spiliani” and was constructed in around 550 B.C. by Efpalinos, a famous hydraulics engineer from ancient Megara. The work consisted of a tunnel with a length of 1036m.,a height and width enough for the passing of o­ne person, 80m.benieth the surface of the ground.
Large clay pipes conveyed water while under the tunnel there was a subterranean corridor. The historian Herodotus calls this work “a double-entranced tunnel”. The chance discovery of this work was disclosed in 1881 by the Father Superior of the monastery “Agia Triada”, Kyrillos.
The people of Samos of those times were of the first Greek sea-farers. It is said that the Samian Kollaios discovered the “Herculean Stele” (Gibraltar).
The beginning of the end however, for this glorious era of Samos commences with the brutal death of Polycratis at the hand of the Persian Satrap Orsitis who lured him with trickery and murdered him. The island experienced a period of instability and decline and control was seized by the Persians. 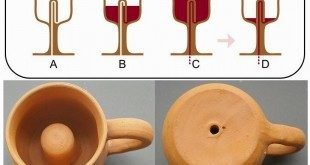 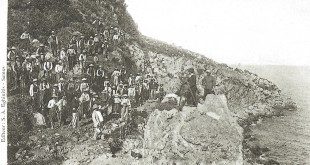 The Construction of the Vathi, Karlovassi Carriage-Way (Picture of 1902)

Undoubtedly the Tunnel of Eupalinos, the central part of the ancient aqueduct, is an admirable …